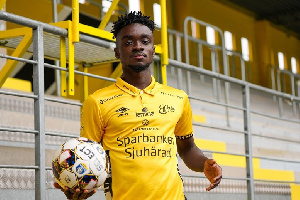 Midfielder Emmanuel Boateng is in line to make his Swedish Allsvenskan debut on Sunday after being named in Elfsborg’s trip to bottom club Östersunds FK.

The 24-year-old was finally unveiled last week after a frustrating four months of failing to secure an entry visa and residence permit.

He arrived in Borås on 10 September 2021 and started training with his new teammates the next day.