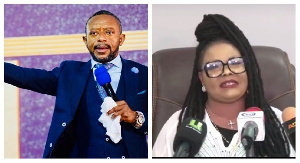 Lawyer for controversial preacher, Reverend Isaac Owusu Bempah, has adviced his client to stay off the media and maintain a low profile as his assault case continues in an Accra Circuit Court.

Lawyer Gary Nimako avers that it is in the interest of Owusu Bempah and all his lieutenants and followers to remain grounded and not make any pronouncements especially in respect of the court case.

“Now that we have been granted bail, everyone should be extra careful what they say. Even the head pastor should not say anything, He should not grant any interview, he should sit down quitely and think of himself as well as other junior pastors,” Nimako said in an interview on a local radio station last week.

Owusu Bempah was arrested a week ago at his church premises over an incident where he threatened a former fetish priestess, Nana Agradaa.

Viral videos showed Owusu Bempah in a car with some aides bearing guns in front of the residence of Agradaa. Bempah along with three junior pastors are facing among others, charges relating to threat to harm and threat of death.

He was refused bail by a Circuit Court on Monday before his lawyers proceeded to the High Court where he was granted a 200,000 Ghana cedis bail.

The case of Owusu Bempah and his junior pastors return to the court on Monday, September 20 for hearing on the substantive case.

“We just didn’t go there, they hauled us there and said they are going to prosecute. The Attorney General is the one going to prosecute, so if he enters a nolle prosequi, the case has ended,” Nimako added whiles appealing that the case be dropped in its entirety.