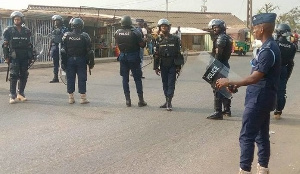 Persons who intend to demonstrate will be held accountable

The Ghana Police Service has cautioned individuals as well as groups of persons who intend to demonstrate against the list of metropolitan, municipal, and district chief executives (MMDCEs) to be released later Sunday to “immediately abandon such plans or face the law”.

This caution was sent after some youth, believed to be members of the New Patriotic Party (NPP), staged an unlawful protest in Jamestown on Saturday, September 18 against the list, which purportedly names a different person to be Chief Executive of the Accra Metropolitan Assembly (AMA).

The protesters allegedly blocked roads at Jamestown and burnt car tyres, creating a sense of fear and disorder.

Four of the ringleaders were arrested.

According to a press release issued later on Saturday by Acting Director-General of Public Affairs ACP Kwesi Ofori, preliminary investigations suggest that the protest was in response to the list.

“We urge everyone to use due process to convey their grievances,” the police advised.

Earlier in the week, the National Security Coordinator also issued high alerts to all security coordinators as well as the chair of security councils across the country ahead of the announcement.

“There are indications of possible clashes ahead of the announcement of MMDCEs in parts of the country,” the alert stated.

“REGSEC, MUSEC, and DISEC are hereby urged to be on high alert to preempt breach of peace in the respective areas.”

Over population of Accra putting pressure on resources – GSS