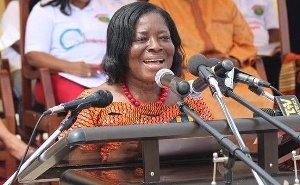 Ama Benyiwa Doe was an astute politician and former Central Regional Minister under the National Democratic Congress (NDC) and a social justice advocate.

According to Wikipedia, she was born in 1950 and christened Comfort Saah. She was also a native of Gomoa West in the Central Region of Ghana.

Her political journey began when she first contested as the Member of Parliament for Gomoa West Constituency in the 1992 general elections on the ticket of the National Democratic Congress.

She subsequently won the election and served as a Member of Parliament for the Gomoa West Constituency in the Central Region.

Ama Beyniwa Doe contested again and won on the ticket of the NDC during the 1996 elections against Joyce Aidoo of the New Patriotic Party.

Four years later after serving as a Member of Parliament from 1992 until 2004, Ama Benyiwa Doe tasted defeat by the New Patriotic Party’s Joe Kingsley Hackman.

Hackman emerged as the victor with a total vote cast of 23,663 representing 63.20% of the total valid votes as against Ama Benyiwa Doe whose total votes cast was 12,165 representing 32.50% for the Gomoa West Constituency.

The outspoken Ghanaian politician continued to work for the NDC as the National Women’s Organizer until she became the Central Regional Minister in 2009 to 2014 after she was nominated by the late president John Evans Atta Mills.

She also served as a former member of the Council of State for a period.

Although she strongly shared her opinions on key issues concerning the country, Ama Benyiwa Doe went into hibernation following the demise of the late president John Evans Atta Mills.

She was reported to have passed away on Sunday September 19, 2021, at Tema according to sources within the NDC.

Ama Benyiwa Doe was largely known for being an outspoken woman and a social justice advocate.