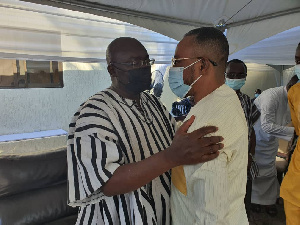 Hajia Mariama Bawumia passed away last Monday, and she has since been buried

The founder and leader of Glorious Word Power Ministries International Isaac Owusu Bempah, has called on the Vice President, Dr Mahamudu Bawumia, to commiserate with him following the passing of his mother, Hajia Mariama Bawumia.

Rev. Bempah led a delegation of his church, which visited the vice president at his private residence in Accra.

Hajia Mariama Bawumia passed away last Monday, and she has since been buried in Walewale in the North East Region.

The Vice President and his family continued the funeral process in Accra on Sunday with a series of Islamic prayers.

The vice president and his family also received sympathisers and loved ones, who called on him to commiserate with him.

Among them was Rev. Owusu Bempah, who paid a surprise visit to Dr Bawumia on Sunday afternoon.