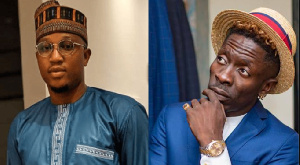 play video3Music boss, Sadiq and Shatta Wale have been engaged in a recent feud on social media

Entertainment pundit, Vida Adutwumwaa, has described Shatta Wale as a dangerous person considering the manner in which he has handled his fight with the 3Music boss, Shatta Wale.

Wale has indulged in an intense social media war with Sadiq over some scathing allegations raised against the latter.

It can be recalled that the SM Boss confessed to have not merited some 11 awards given him during the 3Music awards in 2019.

He claimed that the 11 awards were given him to spite rapper Sarkodie and Stonebwoy.

The 3Music Awards boss who felt Shatta has dragged his reputation in the mud threatened to beat him mercilessly and also asked the dancehall artiste to return all the awards if he so wishes.

Shatta, in another rebuttal, accused the 3Music boss of impregnating an unknown lady in Akosombo despite the fact that he is married.

But sharing her opinion on the matter, Ms. Vida Adutwumwaa believes strongly that Shatta Wale’s decision to involve Sadiq’s personal issues in their fight is totally wrong.

He said Shatta for reasons best known to him is pursuing an agenda to reduce the 3Music Awards boss to nothing.

“I feel it is an attempt by Shatta to run down Sadiq’s credibility, home, and career. Because when you check the post he made, he mentioned that Sadiq has impregnated a girl at Akosombo when he was on a 3Music mission. I feel like there is an agenda to shut down his credibility, private and professional life. If I look at how Shatta is going, he is a dangerous person,” she stated on Bloggers Forum.

Wondering why Sadiq will give out 11 solid awards to Shatta Wale, the entertainment pundit added;

“One thing I keep asking myself is that why 11? Why 11 awards? Why the number 11? If Sadiq wanted to prove a point that Shatta is a top artiste, did he need to give him 11 awards? Where from those tears on stage? Shatta was crying and giving an acceptance speech. What kind of theatrics is that?”

Honor musicians instead of making people vote for them – Gospel artiste

Why Nigeria will produce many young billionaires in 2022 – Rapper