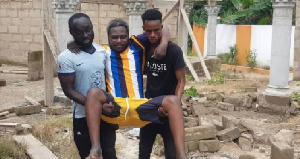 Frank Fiifi Gharbin has been struck with an unknown illness

The National Public Relations Officer (PRO) of the Film Producers Association of Ghana (FIPAG), Mawuli Ekpe also known as ‘Abro’ has stated that Kumawood Director Frank Fiifi Gharbin has no reason to complain about neglect since he doesn’t pay dues.

One can recall that Mr. Frank Fiifi Gharbin who is currently bed-ridden due to his swollen legs called on FIPGAG several times to come to his aid.

But speaking on Kumasi-based Angel Fm Entertainment show monitored by MyNewsGh.com, the National FIPAG PRO Mawuli Ekpe emphasized that the association had already visited their colleague after his current situation went viral on social media.

He said Frank should not expect much from the association after he has failed to pay his dues.

“Sometimes it is difficult to lead Kumawood members because when you try to implement policies which will benefit them, they will sabotage that policy and later they will come and complain when they are in need” he added.