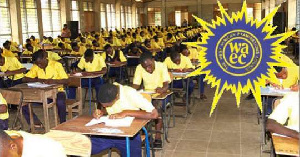 The Ministry of Education is insisting widespread reports about the leakage of some papers in the ongoing 2021 WASSCE forcing the rescheduling of some papers are false.

Deputy Spokesperson at the Ministry, Yaw Opoku Mensah, said the papers in question were put on hold to investigate portions of the question that went out in the media space and not because of the leaks.

When the host of the Morning Starr Francis Abban asked “what happened actually in relation to the two papers that were rescheduled wasn’t as a result of leakage?”, he responded “if you say a paper leaked, what it means is we sat for the paper, then what you have in your hand compared to what the student sat to do is actually the case. We never saw the paper, nobody sat for the paper, no examination material was taken from the outfit of WAEC to be distributed to confirm that there was a leakage.”

“So, WAEC needed to put itself together, verify the claims on the grounds therefore what happened was to reschedule the paper and that was the most important thing.”

Mr Mensah went on “in relation to this specifically, there were allegations of leakages of previous papers that have already been written, so WAEC needed to investigate that and if you go through their press release, at point 4, what we are referring to as leakages we were told that portions of the question were in the media space.”

“If you do have a leaked paper through the process from taking the papers to the examination center then what it is is you should have a full complement of the paper that is what we should be realizing. but we never saw that. What we saw was probably criminally motivated people used their phones in taking the exams papers whiles it was administered, sent it out to other people for whatever reason they know best. That is why WAEC said it wasn’t widespread, that’s speculated.”

He added “and you realise there are certain schools who have been put in the spotlight and their activities are being monitored. But if we begin to heighten the aspect of leakage, mind you we are not doing ourselves any good. But we still call for evidence on that.”

The business management and physics papers were widely circulated before the exams.

The papers were canceled following the leaks.

Government must focus on alleviating poverty among Ghanaians – Kenneth Asamoah