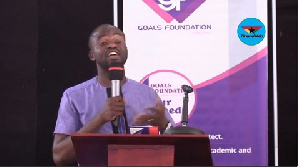 Ghanaians finally got to take a breath of relief on Sunday, September 19, 2021, after waiting nine long months for President Akufo-Addo’s Metropolitan, Municipal and District Chief Executive nominee list for his second term government.

Investigative journalist, Manasseh Azure Awuni however believes the wait might not be over after all.

According to Manasseh, he estimates that Ghanaians will most likely have to wait till the end of the year before all processes are completed for the instalment of the MMDCEs.

“By the time the MMDAs finish confirming the MMDCEs and the swearing-ins are completed, 2021 will almost be over,” Manasseh wrote in a Facebook post sighted by GhanaWeb.

Article 243 (1) of the 1992 Constitution of the Republic of Ghana stipulates that “There shall be a District Chief Executive for every district who shall be appointed by the president with the prior approval of not less than two-thirds majority of members of the Assembly present and voting at the meeting.”

Thus per the dictates of the Constitution, the nominated MMDDCEs will have to earn the approval of not less than two-thirds majority of members of their Assembly present for a vote which will be conducted by the Electoral Commission.

This comes after a delay of nine months in naming the nominees since the president assumed office for his second term on January 7, 2021.

Concerns grew over the period due to the delay as some critics said the delay by the president in nominating his MMDCEs was impeding growth and development at the local level.

However, the president in a radio interview some weeks leading to the release of his nominees list, assured that the delay was in no way affecting governance at the local level.

“They (MMDCEs) are there already. The impression is being given that there are no MMDCEs in the system, it is false. All the people who were MMDCEs in my first term are still at post. I instructed the Chief of Staff who is the administrator of all of these people to extend their tenure in an acting capacity because the president has that power in the constitution. If there is that vacancy, people can act to fill that vacancy pending the appointment of substantive officeholders. So there is no vacuum in local government in Ghana as we speak today,” he the president said.

People in diaspora should make decisions rather than government – Investors lobby