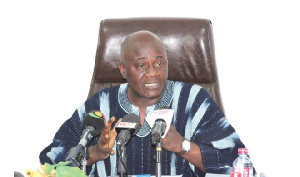 A total of 38 females have been nominated for the Metropolitan, Municipal, and District Chief Executives (MMDCEs) positions.

The figure is out of the 260 MMDCEs appointed by the President and released by the Minister of Local Government, Decentralisation and Rural Development, Dan Botwe.

If approved by their respective Assemblies, they will assist President Akufo-Addo at the local government level during his second term.

Meanwhile, 222 males have been nominated.

No female was nominated in the Western and Ahafo regions according to the list.

In the Greater Accra Region, eight females were nominated for the MMDCEs role including Elizabeth Sackey, the MCE for the Accra Metropolitan Assembly (AMA).

Twenty-one (21) males were nominated in the same region.

In all the 16 regions, males outnumbered female nominees.

Speaking at the press conference on Sunday, the Minister of Local Government, Decentralisation and Rural Development, Dan Botwe said Regional Directors of the Electoral Commission will on Monday get in touch with the Presiding Members of the various Assemblies and start the process of confirming the President’s nominees.