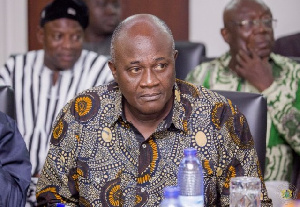 Minister for Local Government, Decentralisation and Rural development Dan Botwe has said there had not been any vacancy at the Municipal and District Assemblies due to delays in appointing MMDCEs.

According to him, the District Assembly Common Fund (DACF) was also not delayed because of the same reason, although he acknowledged that the monies delay at times.

Mr Botwe said, “there has not been any vacancy. I may want to admit that for about six or so MDCEs who I know contested and won elections and came to parliament; admittedly, in those places, we could say maybe there was a vacancy. But for the rest, we have MDCEs working in the assemblies, and the assemblies are functioning.”

According to Mr Ofosu Ampofo, President Akufo Addo’s delay in appointing MMDCES after nine months in office has already stalled development at the local government level; hence prays that efforts are made to mitigate impediments that may prevent smooth confirmation of the nominees.

“The nomination of MMDCEs have taken too long to come because at the normal circumstances when you form a government, one of the first positions that the government appoints is the Minister for Local Government because the Minister for Local Government ought to be approved as quickly as possible by Parliament so that he will be able to settle down and in consultation with the president make a nomination for the MMDAs.”

Ofosu Ampofo, who is the National Chairman of the opposition National Democratic Congress, NDC, said this Sunday at Suhum at the sidelines of a forum organised by the youth wing of the NDC in Suhum Constituency.

He lamented the delay in the release of the District Assembly Common Fund, which is supposed to be a catalyst for development at the district levels.

Mr Ampofo stated that this is affecting the ability of the Assemblies to undertake significant projects.