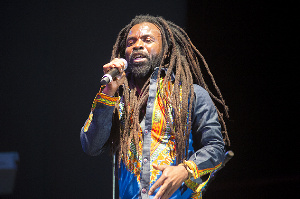 Ghanaian Singer, Songwriter and Record Producer Rocky Dawuni has challenged Africans to fully embrace who they are and stand up to make their presence felt in the international arena.

He said Africans have a lot to offer culturally, and it is rather unfortunate that they are not totally maximising opportunities in their uniqueness.

Dawuni spoke on the GTV Breakfast Show on Friday, September 17, 2021, where he expressed disappointment that Africans have a lot to offer but are not taking advantage of their positions.

“Africans don’t embrace who they are,’’ he said.

Rocky Dawuni explained that Ghana talks about the Beyond the Return concept but is spiritually disconnected from the reality of the issues. In the view of the Grammy-nominated musician, Ghanaians need to be more accepting of the people from the Diaspora.

“The power of the Ghanaian, black people is diminished if we do not connect spiritually and culturally,’’ he emphasised.

Rocky Dawuni was sad that African leaders who should be spearheading the agenda of uniqueness sometimes tend to sing to the tune of other masters.

“Lots of leadership are clients of others. We need to push the ideals that make us who we are,’’ he posited.

Rocky Dawuni is famous for his performances and signature ‘Afro Roots’ sound, which is a mixture of Reggae, Afrobeat, Highlife and Soul music.

He said he got a lot of inspiration from listening to his mother play the popular Ghanaian genre, Highlife. Also, he listened to a lot of Amakye Dede, Nana Kwame Ampadu, Eddie Donkor, amongst others, all of whom are Ghanaian Highlife Music Legends.

For Dawuni, Highlife is everything Ghanaian music, and this must be cherished. He believes that music is food for the soul and said this is the best time to listen to music, given all that has happened globally.

“Music can carry you through the troubles of the day,’’ according to Dawuni.

“Woara’’, is Rocky Dawuni’s new track. He also recorded a video which he said depicts a lot about the Ghanaian tradition.

Dawuni got acquainted with Reggae in Ghana when he heard a Military Band performing one of Bob Marley’s compositions in Michel Camp, where he grew up.

He has seven full-length albums to his credit. The 6th album titled ‘’Branches of The Same Tree’’ was nominated for a Grammy Award for Best Reggae Album in December 2015 for the 58th Annual Grammy Awards.

Rocky Dawuni is in the history books as the first Grammy Nominee from Ghana.

Kweku Darlington poised to make an impact in the music industry

LilWin is far ahead, don’t compare yourself to him – Salinko tells Dr Likee