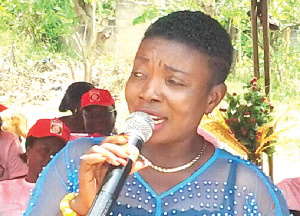 • Mary Boatemaa Marfo has been replaced with the constituency chairman, Osei Adiyiah

President Nana Addo Dankwa Akufo-Addo has replaced the Chief Executive of the Sekyere East of the Ashanti Region Mary Boatemaa Marfo with Osei Adiyiah who is also the constituency chairman.

Mary Boatemaa Marfo was in the news before the 2020 elections for many reasons. Aside from being accused for causing violence in the constituency, an audio of her campaigning for ‘skirt and blouse voting’ against the incumbent MP Dr Afriyie Ayew was in circulation a few weeks before the elections.

Her actions caused some women wings and the Chief of Effiduase to call for her removal.

On September 23, 2020, the president revoked her appointment which was speculated to be influenced by the leaked tape.

She was however reinstated after the president rescinded his decision to sack her without reason.