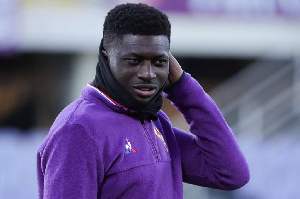 After excelling in back-to-back wins, Duncan was surprisingly left on the bench, but after 26 minutes, he was introduced. He replaced Gaetano Castrovilli, who picked up a serious injury.

And the 28-year-old was the fourth highest-rated Fiorentina player by Sofascore with 7.1 ratings after an excellent display.

In the 65 minutes he spent on the field, Duncan contributed 44 touches, 27/33 (82%) accurate passes, successful in three of the attempted four ground duels and managed one shot on target.

Before the game, manager Vincenzo Italiano said he wasn’t sure the midfielder would start, although he acknowledged Duncan had been outstanding in the last two games.

He said: “Based on the state of form, based on the behaviour during the week, based on the race strategy. We have eight midfielders; the problem is mine now, of the coach, so I will always try to send players who can do a great performance on the pitch.”

Duncan, who was almost sold in the summer transfer window, looks revitalised and has played three consecutive matches after missing the first two games.