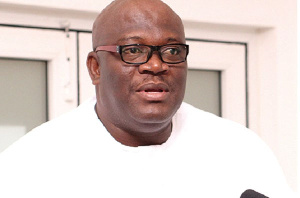 The Greater Accra Regional Minister Henry Quartey and the Greater Regional Office of the governing New Patriotic Party (NPP) has jointly issued a statement calling for calm following the list of nominees appointed as MCEs in the region.

The statement asked the residents in the region especially NPP supporters to commend the President for the broad consultations done before the nominees were appointed.

“Despite the constitutional prerogative for the President to nominate MMDCEs, he initiated a wide consultative process to facilitate his decision on who represents him in the various MMDAs.”

Read the full statement below

PRESS STATEMENT ON NOMINATION OF MMDCEs

The Regional Minister, and Regional Executive Committee of the Party led by the Chairman, wish to share this message of felicitations to all dwellers of the Greater Accra Region for the cooperation in the announcement of the MMDCE nominees by His Excellency the President of the Republic of Ghana, Nana Addo Dankwa Akufo-Addo.

Despite the constitutional prerogative for the President to nominate MMDCEs, he initiated a wide consultative process to facilitate his decision on who represents him in the various MMDAs.

We consider therefore unfortunate, the disturbance that ensued in the Ashiedu Keteke Sub Metro (Odododiodioo Constituency) in relation to a perceived list of MMDCE nominees which does not include their preferred choice, in which the police intervened and made some arrests.

We appreciate the rapt intervention of the Mayor and the consequential press release to de-escalate the situation.

We seize this opportunity to advise all interested persons, especially political actors of the New Patriotic Party to desist from acts that will disrupt the processes to confirm the appointment of the President’s Nominees in the various Assemblies.

In this light, the Regional Minister and the Regional Party crave the indulgence of Presiding Members of the various MMDAs to liaise with their Coordinating Directors to facilitate the confirmation process expeditiously.

It is the President’s prerogative to appoint and we believe the President has confidence in his nominees to well represent him.

We equally beseech all honourable Assembly Members to uphold the nominees of the President and vote massively for the continuation of the development of Greater Accra.

Let’s Make Greater Accra Work agenda is still on course, and it has an earnest expectation that all nominated MMDCEs will join in this quest to improve the development of our dear Region soon after their confirmation.

We thank you all for the support.

Mahama was open to me than any Ghanaian President – Chief Momodu