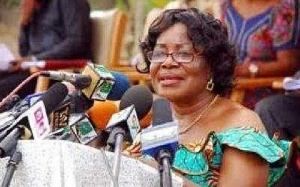 Ama Benyiwa Doe served as regional minister from 2009 to 2014

According to GBC News Correspondent Kingsley Nana Boadu, reaction from the people is one of sorrow as people reminisce her contribution to the growth of the National Democratic Party, NDC in the Central Region and the country as a whole.

They described the Late Benyiwa Doe as, ‘’a Pillar of the Party’’ in the region. Some people in the Central Region say they knew she had been unwell, but are sad by her demise.

The vociferous Politician served as National Democratic Congress, NDC MP from 1992 to 2004.

As a Former Council of State Member, Ama Benyiwa Doe, would be most remembered for her aggressive and controversial approach to Radio Political talk shows and vociferous nature on matters of politics.

Her demise had been rumoured some years back following her absence from the political scene. She was born in 1950, christened Comfort Saah and hailed from Gomoa West in the Central Region.

She contested in the 1992 December elections on the ticket of the NDC and won the Gomoa West seat for the party. She served in Parliament from 1992 until 2004 when she was unseated by the New Patriotic Party’s Joe Kingsley Hackman.

The Outspoken Ghanaian Politician continued to work for the NDC as the National Women’s Organizer until she became the Central Regional Minister in 2009 to 2014 in the erstwhile President John Atta Mills Administration.

The late Ama Benyiwa Doe went into hibernation after the demise of the Late President John Evans Atta Mills. She was largely known for her Outspokenness and as a social justice advocate.