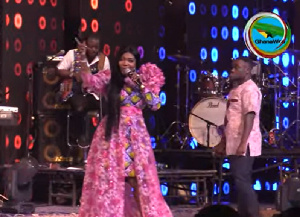 play videoFlorence Obinim performed at the 2021 Women in Worship

• Florence Obinim has made a stage appearance after going AWOL

• The singer performed at the 2021 Women in Worship

• Florence Obinim performed her hit songs at the event

Gospel musician, Florence Obinim, delivered a spirit-filled performance when she took to stage at the Women in Worship 2021.

This will be her first performance in a long while.

Florence received loud applause from her fans and audience who had trooped to the UPSA Auditorium on Sunday, September 19, to witness their celebrated gospel musician perform at the musical concert.

The singer dazzled in an African print dress custom made to fit her body. She took the audience down memory lane as she formed her hit singles including, “Osoro ne Mefie” and “Kristo Reba.”

Florence was also joined by Nigerian singer, Princess Ifeoma on stage where they performed their song titled “God Never Fails.”

The singer who is married to popular preacher, Reverend Daniel Obinim, took a break from the music scene when she relocated to Spain.

New crop of artistes shun us, refuse to work with us – Kokoveli laments