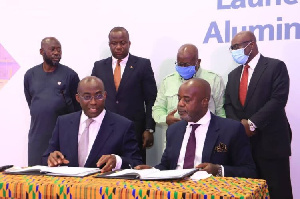 GIADEC has selected Rocksure International, an indigenous company as its strategic partner to develop the second of four projects to be executed under the IAI value chain initiative which is expected to create a US$6 billion bauxite to processed aluminum value chain.

This is one of the most important projects for President Nana Akufo-Addo who sees it as what should be one of his biggest legacies. This is evidenced by his personally witnessing the signing of the partnership agreement where he affirmed that the IAI value chain is a key part of his administration’s industrialization agenda. He further assured that his government will see the initiative through despite its dauntingly ambitious scope. The IAI value chain will involve mining, refining and smelting, all to be done in an environmentally and socially responsible manner.

While the key event last week was the signing of the agreement between the public and the private sector partners, President Akufo-Addo also launched GIADEC’s four project agenda towards establishing the IAI supply and value chain. The President defended GIADEC’s assertion that Rocksure International was selected through a transparent, competitive and rigorous investor engagement process. Unsurprisingly Rocksure’s selection has already generated controversy, especially from the political opposition in search of political point scoring opportunities. More unbiased and measured criticism from industrial economists nevertheless still questions Rocksure’s financial capacity to execute its responsibilities for the first of a four-phased project.

President Akufo-Addo however has insisted that Rocksure’s being indigenous has worked in its favour with regards to the selection process, since his administration is committed to the implementation of local content and local participation. It is consequently being speculated that government will offer substantial financial support, possibly in the form of partial financing on concessionary terms or a partial credit guarantee, both or either of which would fall within the ambit of both the Ghana Export Import Bank and the impending Development Bank of Ghana.

Government’s support for the initiative was reaffirmed at last week’s partnership signing event by the Minister for Lands and Natural Resources, Samuel Abu Jinapor.

The Chief Executive Officer of GIADEC, Michael Ansah, revealed that the partnership agreement is a precursor to a joint venture involving both partners to build a new mine at Nyinahin-Mpasaaso accompanied by a bauxite refinery.

The four projects needed to put the IAI initiative in place, are estimated to require some six billion dollars to execute cumulatively, but are to be executed in phases and this makes the whole scheme one of the most ambitious initiatives embarked upon since Ghana’s independence.

They would all largely be driven by private investors in partnership with the Ghana Integrated Aluminum Development Corporation (GIADEC). This implies that the partnership agreement with Rocksure will serve as a model of sorts for the structure of the three other projects, although any identified shortcomings in this first one would lead to tinkering with the structure of the partnership agreements to be used for then other projects,.

The entire initiative will be implemented in four phases, with the first phase involving the expansion of the existing mine at Awaso in the Bibiani-Anhwiaso-Bekwai Municipal district of the Western North Region, and the building of a bauxite refinery.

The second phase will see the development of a mine and an accompanying refinery at Nyinahin-Mpasaaso in the Atwimaa Mponua District in the Ashanti Region; this is the project which as just got a partnership agreement to execute it.

The third phase will also see the development of a mine in Kyebi in the East Akim Municipal District of the Eastern Region and a second mine at Nyinahin-Mpasaaso.

Refineries will also be built in the Atwimaa Mponua District in the Ashanti Region and Kyebi, respectively.

In the fourth phase of the projects, the VALCO smelter will be modernised and expanded to improve efficiency and increase capacity.

Mr. Ansah stressed that Rocksure International will, first, undertake a Mineral Resource Estimate (MRE) to validate and define the bauxite reserves which will guide the capacity and engineering solutions to be applied to the construction of the mine and a refinery.

The lifetime of the mine is estimated to span over six decades and will create over 1,000 direct and indirect jobs.

He reiterated that the four projects will be private sector-led and will be executed in partnership with key strategic investors to ensure that commercial viability is maintained throughout the process of establishing the supply/value chain. Interestingly a study done in 2019 by the globally respected Natural Resources Governance Institute, which as a subsidiary office in Accra, suggested that the projected cash flow from the initiative may not be enough to meet the financing obligations.

However government remains undeterred, persuaded to aggressively see the initiative through, largely by the prospects for a wider, holistic aluminum industry it stands to create.

Indeed, the biggest ultimate impact of an Integrated Aluminium Industry, will be felt in the downstream sector where demand for aluminium and aluminium related products are expected to rise especially with the establishment of various car manufacturing plants in the country.

This value-addition drive will not only result in a thriving local economy but will significantly cut down on the importation of aluminum and aluminum products, Ansahpoints out. Indeed Ghana’s dominance of the sub regional aluminum products industry in the 1990s when VALCO was still operating at near full capacity (before energy pricing considerations persuaded government pull the plug on half of its installed production capacity) was a major plus for the country as it built up a non-traditional exports sector and successfully substituted substantial hitherto industrial imports with locally manufactured versions which were both price and quality competitive across several West African markets.

GIADEC is a state-owned company responsible for the development of an integrated aluminium industry in Ghana. The company’s portfolio of assets includes mining rights to all of Ghana’s 900 million tonnes of bauxite reserves, 100% shares in Valco – Ghana’s smelting company and interest in Ghana Bauxite Company Limited, a producing mine that has been operating for over 70 years.

Through strategic partnerships, GIADEC, will hold equity stakes in new mines and refineries to be established, and drive integration of the bauxite – aluminium value chain to create value.

Rocksure International is a wholly-owned Ghanaian mining services company that operates across Ghana and the West African sub-region with expertise in mining services, drilling services, load and haulage. The company has considerable capacity and flexibility in planning, equipping, staffing and managing mines; having supported several mines including those owned and run by Anglogold Ashanti, African Underground Mining Services, Gold Fields, Ghana Manganese, Asanko Gold, Bumi Mine among others.