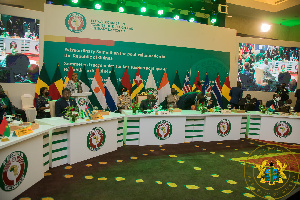 ECOWAS leaders met in Accra on September 16 for discussions on Guinea, Mali crisis

He holds that if ECOWAS insists on respect for its treaties and conventions, the rising spate of coups will be quelled before it becomes a trend across the region.

GhanaWeb monitored comments he made on Joy FM’s Newsfile program on Saturday, September 18, 2021. He was contributing to political developments in Guinea where a September 5 coup ousted president Alpha Conde.

“I think very definitive steps should be taken to quell this once and for all–where presidents think they are above laws they have signed onto, and that they can decide to do whatever they like must not be countenanced.”

On September 5, 2021, a group of elite military forces announced the overthrow of Conde’s government less than a year into his controversial third term. The junta was led by Colonel Mamady Doumbouya.

ECOWAS has thrice condemned the coup – twice at a summit of leaders and the first instance in a statement issued by ECOWAS chairperson, Nana Addo Dankwa Akufo-Addo, shortly after the coup.

ECOWAS has been slammed for looking on as Conde changed the constitution but speeding to condemn and sanction the military junta. The bloc insists that it had unsuccessfully engaged Conde when he was pushing through the change.

What Nkrumah said about his birth and birthday in his autobiography