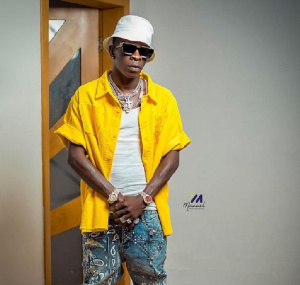 Samini has dared dancehall musician, Shatta Wale, to release just a single hit song but the latter says he will not respond to his dare because he’s not on his level.

Shatta Wale in an interview on JoyNews described the ‘Linda’ hitmaker as a lazy and broke artiste confirming Samini’s tweet where he indicated that Shatta Wale goes about calling him “poor”.

According to Shatta Wale, all those attacking him are broke.

“#yearoftruth we go face them squarely he go come talk say I’m poor meanwhile, you no get money. Fanfool and beg beg and kiss ass vibes s)))).. you ever see say I delete tweet or apologize to anyone for lose talk before? Lion status man. @shattawalegh stop Dey fool,” Samini wrote in a tweet dated September 15.

But in a savage clap back, the SM boss has once again reminded his critics how much it cost him for a wristwatch.

“I want to tell Samini, if he can buy a fifty-five thousand dollars Rolex then I can respond to that. He’s being lazy, it’s about making money, he should stop doing that.

“He is a dead artiste, that’s all I want to tell him, he is just dead. He doesn’t know what’s up, he doesn’t know where business is going to. I believe I am doing real business; he is working with feelings. If he thinks he can release thousands of songs, look at the crowd here, no fake thing. This is real, my people love me. Samini cannot come and stand here and get this. He no get money, that’s what I want to tell him,” said Shatta Wale.

We do not recognise the so-called ‘Table of Men’ – Mckay