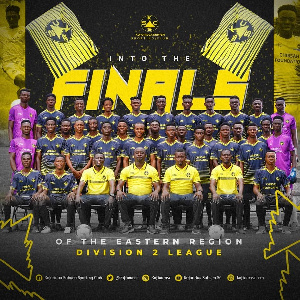 Suhyen has made the final of the Division One League

Koforidua Suhyen Sporting Club humiliated Talons FC 7-2 at the Phar Rangers park Mampong to sail through to the final of the Division One League qualifiers.

The undefeated Eastern Regional zone 2 champions tasted their first defeat after 18 games by 2-1 to Great Warriors which tainted their chances of qualifying to the finals.

The Black and Yellow Boys needed the three maximum points and a favor from Fotobiman FC to beat Great Warriors to secure the final slot.

Warriors went into their last game on top of the group. However a 4-0 defeat to Fotobiman FC ensured they dropped to 3rd in the group.

The two decider games were played simultaneously at Dawu and the Mampong park respectively at 9:30am on Thursday.

Following their poorly first half performance against Warriors, Coach Oppong made four crucial changes to the side that lost last weekend.

The six unanswered goals in the first half started with Baba Fuseini’s brilliant strike outside the 18-yard box before Yussif Chibsah added his hattrick. Baba Fuseini found the net again for his brace of the day with a goal each from Nelson Odoi and Frederick Twumasi to seal a historic place in the middle-league finals for KSSC.

The final game which was scheduled to take place on Sunday, September 19 has been placed on hold following a crowd violence that disrupted the decider match between Okwahu United and Kwabibrem FC

2022 AWCON qualifiers: We are well prepared- Black Queens coach ahead of Nigeria clash

Hearts of Oak will be ready for Wydad Athletic – Communications Director