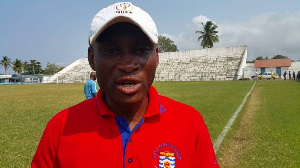 Dr Prosper Narteh Ogum, a lecturer at the University of Cape Coast (UCC) has been appointed as the new Head Coach of Asante Kotoko, the club announced on Sunday.

The Sports Psychologist, Educationist and Coach joined the Porcupine Warriors from Ghana Premier League side WAFA.

Mariano Barreto resigned from the job on Saturday just after six months in charge of the club.

Dr Prosper Narteh takes over having signed a two-year contract with the Ghana Premier League giants.

“We’re delighted to announce Dr. Prosper Narteh Ogum as our new Head Coach”, a statement from the club read.

He has previously coached other clubs such as UCC Football team, Dwarfs, Elmina Sharks and WAFA.

According to reports Dr Narteh will be allowed to appoint his own backroom staff.

The coach is currently involved in Asante Kotoko transfer business in the ongoing window.

He has been able to convince two players of WAFA who were set to join arch-rivals Hearts of Oak to sign for the Porcupine Warriors.

The 2021-22 Ghana Premier League season is scheduled to start next month with Asante Kotoko making a return to the Baba Yara Sports Stadium.

GFA, Sports Ministry to discuss salary with Rajevac before agreement