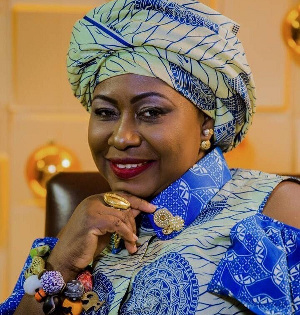 Renowned Ghanaian journalist and gender advocate, Gifty Anti, has expressed disappointment in the level of female representation contained in the President’s list of MMDCE nominees released on Sunday, September 19, 2021.

President Akufo-Addo, through the Minister for Local Government, released his list of Metropolitan, Municipal and District Assembly Chief Executive nominees for his second term.

Commenting on the list of 160 nominees made up of only 38 females, Gifty Anti posits that the ruling New Patriotic Party government could have done much better in terms of gender balance.

“The painful part about this MMDCEs list and the Gender Agenda is that, some of the very people we are fighting for and hoping they would have been appointed, will be the very ones insulting, shading, and defending it all in the name of politics. Smh.

“I mean seriously, is this right? Is this fair? Does it even speak well of your party and government? Does it glorify Ghana?

“Of course it’s been bad for years but the NPP could and should have done better!! much better…when it comes to female representation at all political levels!!” she wrote in a piece shared on her social media page titled ‘51% of 260=38’.

According to the celebrated gender activist, it could never be that the president was unable to find females suitable to serve as MMDCEs in his second government.

“First they said ‘blame the women, women don’t vote for women’. Ok this one is by presidential/government nomination/ appointment! (Or whatever) So What happened? 260 and only 38 women? How? What happened?

“And I am not sure it’s because ‘you don’t have the women’. Because You do paaa. We see them and we know them.

“This is very disappointing and heart breaking!! This is a blow and it’s not about NPP/NDC. This is about Ghanaian women,” she added.

She however stated her conviction that the narrative in terms of female representation in the governance structure will change in the near future.

“But we won’t give up. We will keep fighting, we will keep pushing, we will continue to advocate, lobby and talk, until Ghanaian women get a fair, equitable, and equal representation on all National Political platforms!!!Across board!! Irrespective of which political party is in power!! I strongly believe this can and will happen …and soon too. Hopefully in 2025!! Yes I am that hopeful!!

“To the women who have been appointed/nominated, Congratulations and I wish you well!! I hope you will pursue and push the gender agenda!! In all your ‘doings’, remember the Ghanaian girl and the Ghanaian Woman. God bless our Homeland Ghana,” she stated.