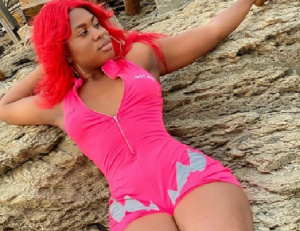 play videoYaa Jackson is a Ghanaian actress and singer

Yaa Jackson’s younger brother, Jackson K. Nyame ‘Sherf’ has revealed some deep secrets about his sister especially with regards to her relationship with God.

In the interview with Kumasi Online TV, Nyame detailed that his sister’s relationship with God has taken a nosedive.

Touching on the ‘tear rubber’ hitmaker’s constant body exposure on social media, he said it is one of the results of the absence of God in her life.

“I pray for my sister every day because I know where her soul is. I’ve told her countless times that her soul is not with God and she knows,” he said.

Nyame however disclosed that Yaa Jackosn wants to repent after a terrible dream she had.

“I know her heart, she wants to repent. God revealed something to her and she told me it was in a form of a dream. In the dream God spared her life from eternal damnation at a time she had no hope and least expected it,” he disclosed.

>Watch the video below