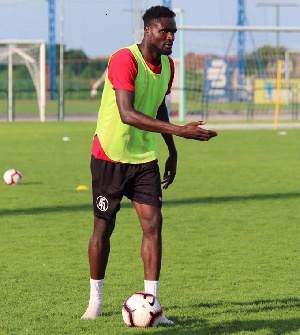 Ghanaian midfielder Nasiru Moro will miss three games at Orebro SK for a red card during his side’s game against Varberg in the Swedish Allsvenskan.

The midfielder headbutted Robin Tranberg of Varberg and was shown a straight red car.

After investigations by the Swedish Football Association disciplinary committee, it was agreed that the midfielder will be banned for the next three matches.

“After taking note of the report, statement and match video, the disciplinary committee states that what happened should be punished with further suspension in addition to the automatic match. The length of the suspension is determined according to the board’s practice and corresponds to two matches,” the disciplinary committee wrote in their decision.

Moro will miss the game against Ostersunds, having already sat out of the defeat to Norrkorping.

Meanwhile, the former Accra Lions player expressed remorse and apologized to his teammates for the incident.

“I was very sad. I thought I had put my team in a really difficult situation because we needed all our players on the pitch and how struggling everyone was because of me,” he told Nerikes Allehanda.

Hearts of Oak vs Wydad: Five things we learnt