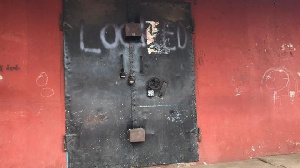 The Ghanaian traders, after demonstrating, embarked on the lock-up exercise

• It appears the Ghana-Nigeria trade war is an unending one

Some members of the Ghana Union of Traders Association (GUTA) have on Monday, September 20, 2021, locked up some shops belonging to foreign retail traders.

They also hit the streets to register their displeasure about the influx of foreigners in the retail space in the New Juaben South Municipality.

According to Citi News report, the Ghanaian traders, after demonstrating, embarked on the lock-up exercise.

Some of the Ghanaian traders wielded placards which had several inscriptions on them.

Among others were inscriptions including; “police must prevent illegal trading”, “foreigners are prohibited from retailing our markets”, “obey Act 865 section 27A now’.

In a citinewsroom interview with the Koforidua GUTA, Public Relations Officer, Darlen Nana Boateng said it is inappropriate for these foreigners to flout the Ghanaian trade laws.

He said, “Our members shut down a shop but when the business owner came in, he opened the shop and insisted that he will work and whatever it takes, he will not comply with the directive. No one is here destroying anybody’s business, but people should not, on their own, take the law into their own hands and be resisting the laws of Ghana. The foreign retailers should just comply with the law.”

BOST is now a profit-making body, to become best in sub-region – MD