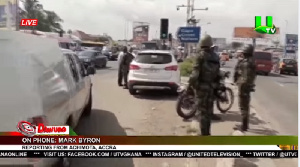 A screenshot of the crime scene

• Armed robbers struck on Monday afternoon at Apenkwa, a suburb of Accra

• They robbed a woman of GH¢29,000 in the process shooting a bystander they mistook for a police

Police have released details from a robbery incident that took place today (September 20, 2021) at Apenkwa, a suburb of Accra.

A Ghana Police Service statement signed by ACP Kwesi Ofori, Acting Director General for Public Affairs, said police were pursuing three persons believed to have been involved in the incident.

“The police in Accra are seriously pursuing three persons for allegedly robbing a 33-year-old woman off GH¢29,000 today, Monday, September 20, 2021, at gunpoint at Apenkwa.

“The victim escaped unhurt, however, a bystander sustained some injuries and is responding to treatment,” the statement added.

GhanaWeb’s earlier report citing a UTV journalist who was at the scene said the robbery happened around the Achimota Old Station, which is a few meters from Apenkwa.

The police called on the public to volunteer information to their toll free lines, adding: “We want to assure the public that these criminals can run but they cannot hide. We will get them.”

According to the reporter, the robbers in the act demanding the money from the woman who was driving in her car mistook an oncoming motor rider for a police officer and shot at him.

For fear of getting the motor rider who was shot for the second time killed amid warning shots, the woman handed over the money to the robbers who then bolted on their motorbike from the scene.

A military team around the area arrived on the scene but met the absence of the thieves.

The reporter indicated that the man who was shot sustained injury to his hand while the woman who was robbed was left traumatised from the event.

Listen to Mark Bryon’s report from the scene below: