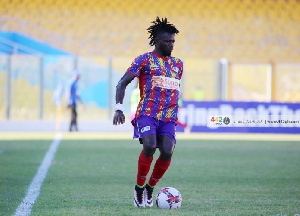 • Fatawu has targeted a win against Wydad Casablanca

Accra Hearts of Oak captain, Fatawu Mohammed, is super confident that his side can qualify to the group stages of the 2021/2022 CAF Champions League.

The Phobians have set up a tie against Moroccan giants Wydad Casablanca in the final phase of the preliminary round of the 2021/2022 CAF Champions League.

Hearts of Oak set up the tie after beating CL Kamsar of Guinea 2-0 at the Accra Sports Stadium in the first round of the preliminary round of the ongoing CAF Champions League.

Fatawu is, however, optimistic that the Phobians can beat the two times CAF Champions League winners in the two-legged tie to make it to the group phase of the competition.

“Wydad Casablanca is a big club but Hearts of Oak is bigger the Phobians will overcome the Moroccan Botola side over the two legs. I’m very confident we will beat overcome them. We are very determined,” he told Asempa FM.