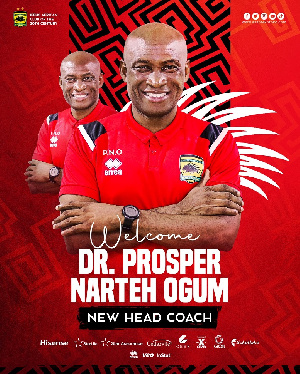 Asante Kotoko Head Coach Prosper Narteh-Ogum has revealed his ambitions for the club.

The former Ebusua Dwarfs gaffer has signed a 2 year deal with the Porcupine Warriors and has been tasked to steer the club to the apex of the game in the country and across the continent.

The task is arduous but certainly not improbable for the former WAFA Coach who has forged a reputation as one of the brightest technical brains in the country.

In his first official interview as Kotoko Head coach, Prosper Narteh-Ogum said he wants to play an aesthetic brand of football that will be well appreciated.

“I want Kotoko to play a beautiful game that would please everyone who watches the team at training and in games.”

Aside playing beautiful football, Prosper Narteh-Ogum had also targeting winning laurels with the side. “I want Kotoko to win trophies in my time here as Head Coach,” he told Kotoko’s CEEK channel.

Prosper Narteh-Ogum wrapped up his talk about his ambition for Kotoko by saying “I want the team to be disciplined in an unprecedented way; that the players would respect themselves, the supporters, and Management and all these people also respect the players back so the players would know they’re important and give their best at training and in games.”

The Coach will be assisted by former Liberty Professionals gaffer David Ocloo and John Eduako.

Alex Clare: The singer who chose his faith over Adele tour

The musician – he plays bass and some drums on the new track, as well as delivering his usual soulful