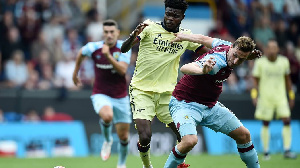 Partey in action for Arsenal over the weekend

Arsenal manager, Mikel Arteta has heaped praise on Ghanaian midfielder, Thomas Partey for playing a crucial role in their 1-0 win over Burnley in the Premier League on Saturday.

Partey lasted for 74 minutes before making way for Ainsley Maitland-Niles as the Gunners secured a second successive win at Turf Moor.

Martin Odegaard’s first-half free-kick gave Arsenal their first away win of the season.

“He’s really important because he is the anchor,” Arteta said as reported by the club’s official website.

“He is the one that needs to read what is happening and make the rest better.

“How he managed the transitions was top, he has the pressing and the charisma, and then he struggled at the end. He could not finish the game because he was cramping. But that will come up.

“He missed a long time but now he’s back again and he needs some more fitness back.”