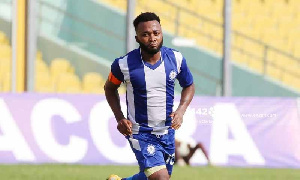 Accra Hearts of Oak coach Samuel Boadu says Gladson Awako was not included in the squad that beat CI Kamsar on Sunday because of sickness.

The midfielder played no part in the preliminary round encounter which the Phobians won 2-0 to progress to the next round of the CAF Champions League.

Prior to the game, reports were rife that Awako had told the club he is no longer interested in playing for them. But Boadu debunked reports in an interview on Happy FM, a day after laboured victory.

“Awako isn’t part of the team for some time now due to sickness, he has sought permission to go for treatment and going forward, we’re hoping to see him back to the team soon in the upcoming games”

“As a technical man, I don’t know where that news is coming from that Awako has quit Accra Hearts of Oak.”

18 role models to be honoured tomorrow

Census is over, beware of people who parade themselves as census officials – GSS