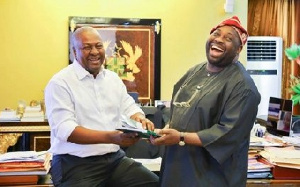 • He said, Mahama is one of the greatest African leaders of his generation

• He described President Akufo-Addo as someone who is very eloquent

“I have no regret whatsoever liking and loving John Mahama,” Chief Dele Momodu, the CEO of Ovation International has said.

According to him, the former President of Ghana, is viewed as one of the greatest African leaders of his generation.

Speaking about why he brought in Nigerian actor, Nkem Owoh, popularly known as Osuofia, to shoot a commercial for John Dramani Mahama’s campaign in 2016, Dele Momodu said, Osuofia is a close pal and he needed not to pay him any amount for him to do anything for him, all he can get him is just buy him a plane ticket and he [Osuofia] is ready to do anything.

“My love for Ghana will never be appreciated today, but I know that when tomorrow comes, people will say that there was one Nigerian man who promoted Ghana than his own country…,” Chief Momodu told Bridget Otoo on One on One show, Monday, September 20, 2021.

When asked if he has reached out to President Nana Addo Dankwa Akufo-Addo, Chief Momodu said the President is a man who is very eloquent and “I have always regarded him as a very good man but some people have to fan the ember of disunity…but everywhere I met him, he has always been nice to me and I am very grateful.”