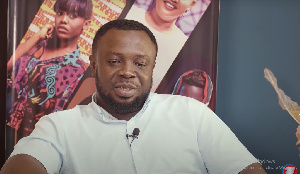 • The actor said his efforts were not appreciated

• Ntatia actively campaigned for the NPP during the 2020 elections

According to Ntatia, he wasn’t paid for campaigning for the NPP during the 2020 general elections, unlike popular assertions.

It can be recalled that the actor together with the likes of Prince David Osei, Kalybos, Bismark the Joke actively embarked on a door-to-door campaign for the NPP during the elections.

With regards to their lavish lifestyle on social media after NPP won the 2020 elections, these actors created the perception in the minds of people that they had ‘cashed out’ big time.

The four gentleman were mostly captured on social media taking first class trips and embarking on tours outside the country.

But touching on such assertions, Jeneral said;

“I’m not an NPP member, I supported the party because of their Free SHS initiative. I’ve had a whole lot of close friends and relatives benefit from the initiative. But despite all my support, nobody appreciated my efforts. I wasn’t given a dime not even 10 pesewas. All the trips we embarked on after the elections were from our own pocket.”

Jeneral Ntatia said although he did not receive any payment for his efforts, he wouldn’t describe them as ungrateful.