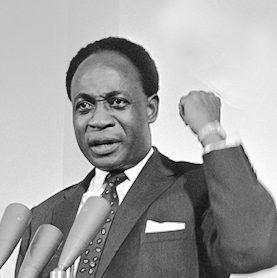 The historian and lecturer explained that the late Nkrumah was the key face behind the independence struggle.

He said although the New Patriotic Party does not believe in the ideology of Kwame Nkrumah nor do they believe in socialism, they have come to respect and understand the critical role of the late Nkrumah.

He insisted that Dr. Kwame Nkrumah is the primus inter pare of the struggle for independence.

He said it is without challenge that Dr. Nkrumah led the struggle for Ghana’s independence.

He added that without him, Ghana would not have attained independence.

He was speaking on Nyankonton Mu Nsem on Rainbow Radio87.5Fm.

Mr. Kwaku Darko said the historical fact can not change and the role of Nkrumah must not be skewed for any reason.

To him, the late Nkrumah was the father of modern Ghana and for that reason, he was cherished in several countries across the globe.