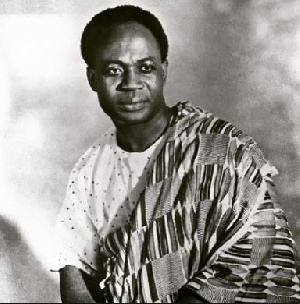 • Dr. Kwame Nkrumah is the first President of Ghana

• His father was a goldsmith

Nkrumah’s father was a goldsmith by profession.

He hailed from Nkroful in the Nzema East, now Ellembele District of the Western Region.

Due to his profession, Opanyin Ngolomah moved to live at Tarkwa-Nsuaem in the Wassa Fiase Traditional area where he practiced his goldsmith business.

While at Tarkwa-Nsuaem, Opanyin Ngolomah met and married a woman by name Elizabeth Nyaniba, a fishmonger and a petty trader.

A few years after marriage, Opanyin Ngolomah returned to his hometown, Nkroful, with his wife.

The couple lived at Nkroful for some time until young Kwame Nkrumah attained school-going age.

In pursuit of his goldsmith business, Opanyin Kofi Ngolomah and his wife left Nkroful together with their son Kwame Nkrumah and stayed at Half Assini.

While pursuing his education at the Government Training College, now Achimota School in 1927, Kwame Nkrumah lost his father.

The sudden death of his father made things difficult in terms of finances, but with all the hardship, Nkrumah managed to graduate from the college on 1930.

Facts in this article was told by Awulae Agyeifi Kwame II, Omanhene of the Nsein Traditional area, who was interviewed by the Ghanaian Times newspaper.

No increase in transport fares until November 1 – GPTRU

NDC should be careful with Kelvin Taylor – Solomon Nkansah warns