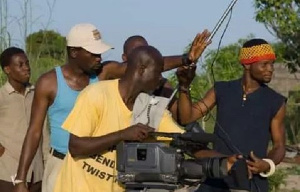 Renowned movie producer and director, Samuel Nyamekye of Miracle Films has opined that successive governments of Ghana do not prioritize the creative industry, hence its current poor stage.

Players of the entertainment industry over the years have criticized government after government for not placing much premium on the arts industry, leaving most of them to suffer and Samuel Nyamekye has added his voice to it.

Sharing his perspective on the dwindling of the Ghanaian movie industry with Tony Best on Akoma FM on Saturday, the director said: “The Nigerian movie industry is doing so well because they have a strong backing of the central government but the same cannot be said of Ghana.

“The government doesn’t know the value of the creative industry.

“Aside the vast population of Nigeria which is a contributing factor to their growth, the government has pumped huge sums of money into their industry, that’s why Nigeria is far ahead of us.”

Samuel Nyamekye revealed that those bashing Psalm Adjeteyfio for wasting his prime to be circumspect because the movie industry does not pay as people perceive.