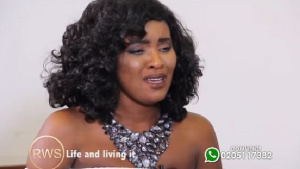 Ghanaian television presenter, Adwoa Saah, has revealed why she moved from Ghana.

In a video sighted by Zionfelix.net, the former Adom TV presenter stated that she ran to London because her life was in danger.

The former Kumkum Bhagya host said a pastor revealed the danger which was ahead of her.

According to her, the pastor told her to leave because of the impending danger.

She stressed that she didn’t leave to seek greener pastures—because she had that in Ghana.

Adwoa Saah recalled how pastors were using her show to preach.

She believes God has a purpose despite all the happenings.

Watch her testimony below

My heart is broken, you always kept me going – Patapaa mourns Nana Ampadu