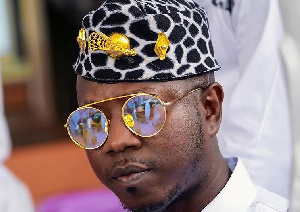 ‘Blow My Mind’ hitmaker, Flowking Stone born Kwaku Nsiah-Boamah, has revealed that no Ghanaian song is being played on mainstream radio stations in London.

“Honestly in London, you don’t hear Ghanaian songs on the radio like Capital Xtra or BBC playing songs by an artiste from Ghana,” he said on Kastle FM in Cape Coast.

Speaking on the Kastle Entertainment Show with Amansan Krakye, Flowking Stone who currently lives in London stated that it’s rare for a Ghanaian song to be played on Capital Xtra or BBC.

He remarked, “It’s rare to hear Ghanaian songs on the radio in London and I have been here for some months now but no song of ours is been played on mainstream radio stations”.

According to Flowking Stone, he mostly does hear songs from Nigerian afrobeat artiste being played on mainstream radio stations in London, unlike Ghanaian songs.