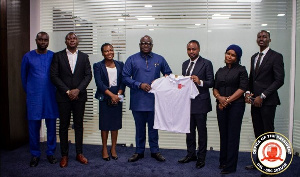 Mr.Kutor (third from right) presenting the Polo shirt to H:E Oquaye while other delegation looks on

The Chief Executive Officer for the Ghana Free Zones Authority, H.E Mike Oquaye Jnr. has pledged his support towards the scholarship fund of the Students Representative Council of the Ghana School of Law, which is to help in the training of more lawyers.

According to him, the education of these students does not only benefit them as individuals but to the general good of society which is why all well-meaning Ghanaians should put their shoulders to the wheels in supporting in their small way.

“ I dare say that we need more lawyers, especially from diverse backgrounds “, he stressed.

Mr Oquaye Jnr. made this pledge when some executives of the Student Representative Council (SRC) of the Ghana School of Law called on him at his office yesterday.

The visit was to seek his assistance towards the scholarship fund, knowing that he is a lawyer and proud school alumni.

It was also to invite him to a public lecture that promises to talk about the law, corporate and investment opportunities and is expected to come off in November this year.

Describing the scholarship fund initiative as a laudable one, Mr Oquaye expressed the view that not all students can afford to pay schools fees which is why President Nana Addo Dankwa Akufo- Addo believes in helping by offering the Free SHS policy.

“ We all know that the president believes in helping those who are not able to afford to still have an education. But for now, it is free SHS, so if we can all support the president’s vision in supporting education in whatever way possible by scholarship, we are prepared to look at that “, he reiterated.

“ We want to give you the assurance that what you brought to us is laudable, and we support accordingly “, he noted.

The scholarship fund was a campaign promise by the current president of the SRC, Mr Wonder Victor Kutor, who made students welfare the focus of his campaign by setting out to initiate a fund that will help cushion students with financial needs.

The SRC President, who also addressed the media, expressed gratitude to the Chief Executive Officer for indicating his willingness to support the scholarship fund.

For him, the ability of Mr Oquaye Jnr to make it to their public lecture will afford the students the opportunity to learn and be educated on his cooperate journey and his experience as Ghana’s High Commissioner to India.

He later donated four branded polo shirts of the Ghana School of Law SRC to the Chief Executive Officer.

Other members of the executive council of the SRC who accompanied their president to the office of the Ghana Free Zones Authority boss were one of the Vice Presidents, Ms Fauziya Tijani and the Organising Secretary, Mr Alan George Dodoo.

The delegation also included the chairperson of the Communications Committee, Ms Juliet Buntugah and her colleague, Mr Patrick Danso Okrah, the head of the Scholarships and Sponsorship Initiative Committee of the SRC.