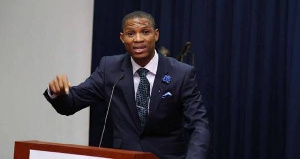 Member of Parliament of the Madina constituency, Francis-Xavier Sosu

Residents of Danfa and Amrahia in the Greater Accra Region have accused the Member of Parliament of the Madina constituency, Francis-Xavier Sosu of failing to fulfill the campaign promise he made to them before last year’s elections.

The residents have registered their displeasure over the poor road network in the area.

The MP is on record to have promised the residents to fix the poor state of the road stretching from Amrahia and Danfa all the way to Ayimensa toll booth, a statement said.

According to the residents, in his bid to win the 2020 elections he (Francis Sosu) was emphatic the poor road network would be fixed and even went ahead to accuse the then sitting MP, Boniface Abubakar of failing to address the problem.

“We have been expecting the current National Democratic Congress Member of Parliament for Madina Constituency Mr. Francis Sosu to continue from where Ahaji Boniface left, but so far, nothing has been done after all the promises to win the hearts and minds of the residents.

“We are aware of the steps taken by the former Member of Parliament for the Madina Constituency and first Minister for the defunct Ministry of Inner-City and Zongo Development under the leadership of President Nana Addo Dankwa Akufo-Addo, Alhaji Abubakar Saddique Boniface to get the roads in the area reconstructed before his exit from office.

“In fact, Alhaji Boniface during his time as MP, had the local chiefs and dignitaries visit the roads and announced the presence of the contractor on-site.”

They also appealed to the government to step in and further expressed optimism that the roads will be given a facelift.

“It cannot be denied that the Ayimensah-Danfa-Amrahia roads definitely stand to benefit from the government’s efforts on road construction.

“However, the current state of the road networks in the area has become very deplorable and unmotorable due to the recent spate of rainfalls. At night, for instance, the road is virtually a death trap because of the lack of street lights.

“Unfortunately, since the elections were over, we haven’t seen any further action. In light of this, we, as residents are appealing to the government to come to our aid by at least undertaking some repairs on the road pending reconstruction.

“As concerned citizens of the area aforementioned would be very grateful if this appeal would be given a positive hearing.”