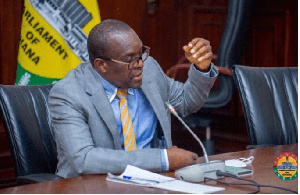 The Speaker of Parliament, Alban Bagbin, has urged youth groups and movements in the country to speak truth to power in order to enhance growth and development of the country.

Speaking at the launch of the Inter schools public speaking competition in Accra on Tuesday September 21, Mr Bagbin said any attempt to stop public speaking on nation building is a recipe for disaster.

In recent times, he noted, in Ghana there are some positive developments in the country that we should commend and not condemn.

“The formation of youth groups and movements in response to thecal of his Excellency the President, HE Nana Addo Dankwa Akufo-Addo to Ghanaians not to be spectators but citizens in the governance of the country should be encouraged and supported by all well-meaning Ghanaians.

“So youth groups such as youth in politics, youth in development, fix the country now are all positive developments that should be encouraged and supported and this resonates well with the call of the Interschool public speaking competition for the youth of Ghana to participate in the debate on nation building.”