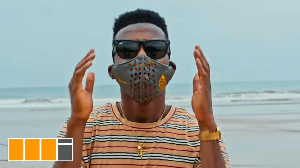 Multiple award-winning artiste, Kofi Kinaata has emphasized that he doesn’t think he’s gotten to the level in the music industry to be called a legend.

“I don’t think I deserve to be called a legend for now because there are greater things ahead that I need to accomplish,” Kofi Kinaata said in an interview with Amansan Krakye.

The ‘Things Fall Apart’ hitmaker who has won VGMA Songwriter of the Year award on four different occasions said that he’s got a lot to do musically to merit the title of a legend.

He continued “There are a lot of things I need to do but personally I don’t think I have gotten to legendary status, besides you can put that title of a legend on yourself.

“Though some people call me legend, it’s the fans who you usually use such words to show their support but I’m not up to that level for now,” he added.

Martin King Arthur popularly known as Kofi Kinaata is noted for his Fante rap and freestyle and apart from his rap prowess, he has grown into a very good singer taking the Highlife genre by storm.

‘Shatta Wale speaks and dresses anyhow, the reason the industry does not attract investors’ – Camidoh