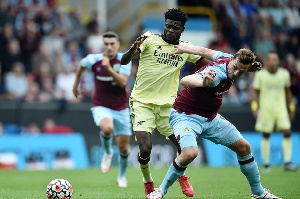 Partey in action for Arsenal over the weekend

Ghana international Thomas Partey suffered a fresh injury on Saturday afternoon while in action for Arsenal in the team’s narrow win against Burnley in the English Premier League.

The midfield dynamo recently returned from a hamstring injury after spending three weeks on the sidelines.

Yesterday, the Black Stats talisman started for Arsenal when the team visited Turf Moore to battle Burnley for the maximum three points at stake.

In the first half, Thomas Partey excelled and helped the visitors to take the lead before the break through a spectacular free kick goal scored by Martin Odegaard.

Unfortunately, the midfield powerhouse could not last the entire duration of the match. He picked up a knock and had to come off as a precautionary measure.

Although it does not appear to be a serious injury, there are fears he could miss Arsenal next match in the English Premier League.

Top of the table clash in Bundesliga, only on StarTimes