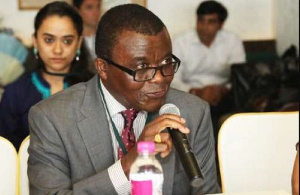 Ghana’s current Constitution has served the country well in the last three decades but it is time for the supreme law of the land to be reviewed.

This review must be targeted principally at devolving power effectively – politically and fiscally – to allow local authorities to undertake much-needed development at the local level.

By so doing, the review will also ensure that the over-concentration of power in the Executive (president) and the Central Government is effectively curtailed.

This is the view of academic and historian, Prof Baffuor Agyemang-Duah, whose views on Net2 TV’s ‘The Seat’ show, which aired a week ago was monitored by GhanaWeb.

“It is about time we review the Constitution because I am of the belief that the context under which it was promulgated was not good. But this Constitution has served us very well for 30 years and has stabilized us and I stand up for the Constitution.

“But it is about time to review it and remove, change and amend certain parts that hinder our progress and there are so many parts that I can spend all day talking about,” he told show host, Kwaku Annan.

He stressed that his interest was not even with entrenched clauses, adding that: “those people will be judged by God, so I am not interested.”

He bemoaned the process where due to the concentration of power at the centre, murder cases for example must be okayed at the national level for the prosecution to take place.

“I think the two dominant parties have been tasting power, (it has) rotated between the two and they know the sweetness of power between the two of them. I don’t believe any of these two parties will accept a complete overhaul of this Constitution,” he added.

He outlined how multi-layer appointments from national, regional and district levels; not to talk of board appointments are all concentrated in presidents – be it former, the present and the future, if the review does not take place.

“That is why the constitution needs serious review to decentralize administration of power and governance in this country. The two parties are not going to change anything because it is in their favour, that is why I support the civil society’s call for a review of the Constitution,” he added.

Ballot Stuffing: Why didn’t you send evidence to court? – Kwamena Duncan to Mahama