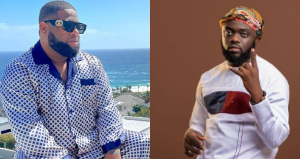 D Black has warned Kwakwo Sheldon, the vlogger, to be mindful of his utterances, especially those about him (D Black)and his business.

D Black has responded to Kwadwo Sheldon’s tweet that Ghanaians do not owe Ghanaian musicians anything. He rebuked Kwadwo Sheldon for dabbling in matters where he has nothing to contribute, and nobody has asked for his opinion.

He wrote, “Young man If u don’t have constructive criticism or positive contributions on how the industry can get better, and how we can take this higher, keep it to urself. No one asked for ur opinion. U sound disrespectful when u speak. Watch ur mouth as well g.”

A few days ago, D Black started a conversation about Ghanaians supporting their musical acts. He revealed that out of the top 20 songs played in Ghana, 18 has Nigerian origins. Whilst some people were in support of his assertions. Others like Kwadwo Sheldon thought asking for support was a bit entitling, especially when his club plays more Nigerian than Ghanaian songs. 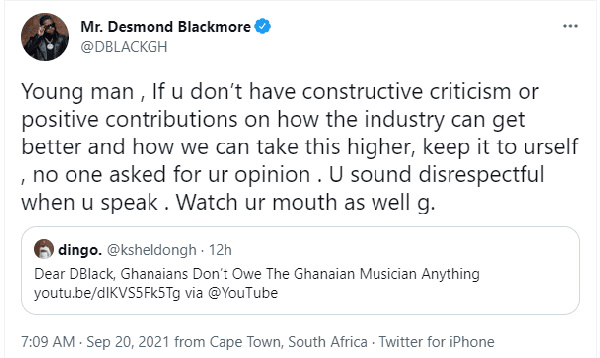 Ghana Jollof is the best I’ve ever had – Ed Sheeran