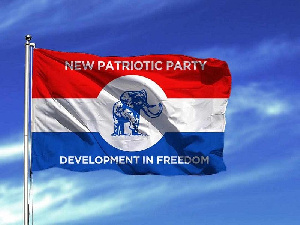 Flag of the New Patriotic Party

Founder of Patriot Ghana, Kwesi Korang, has alleged that if five illegal miners are sampled, four of them are members of the ruling New Patriotic Party (NPP).

He said the majority of persons engaging in illegal mining are party supporters who always claim to have supported the party financially.

He noted that such persons are threatening the lives of Ghanaians and if the government does not stop party members from engaging in galamsey, it would affect them

He also asserted that the NPP lost several seats in the 2020 polls because the party failed to deal with galamsey as they promised and not because they stopped people from mining illegally.

He said we must be thinking about the next generation of Ghanaians and stop people from engaging in illegal mining.

“Party supporters must resist such reckless people engaging in galamsey. They are only thinking of their selfish interests and that of their families. We have to ensure that such people are exposed,” he added.

He was contributing to concerns raised over galamsey activities despite claims by the government that it was dealing with galamsey.

Mr. Korang, who associates with the NPP went on to state that the party could face challenges in 2024 if they are unable to deal with galamsey.

Ghana’s debt situation has not changed much, remain cautious – Dr Asuming to govt