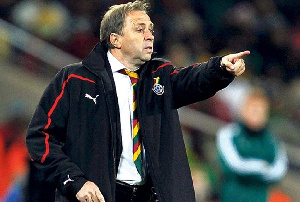 According to him, although the Serbian tactician enjoyed a successful spell during his first stint with the national team of the West African country, the dynamics are different now due to the different players around.

Speaking to Class FM, Neil Armstrong-Mortagbe shared, “…it is still not easy to work with any national team I will say that particular phase that he came to meet was a time where the team was quite settled.

“That is not the case in this particular instant. So it will be interesting to see how he works with this team if indeed he is given the job.”

Asked whether Milovan Rajevac is the best man for the Black Stars job, the football administrator answered, “I can only speak to what I know of him when he [first] came and the type of teams he met.

“The type of team he is meeting now is a completely different one and I have to be very honest I haven’t checked with his track record whether he has met a challenge of this nature before. In terms of the temperament we saw of his when he was with us I think he has a good temperament.”

Although unconfirmed, sources say the Ghana FA with backing from the Ministry of Youth and Sports has reached a two-year contract with the incoming Black Stars coach.

For this spell with the team, Milovan Rajevac will take home a monthly salary of $45,000.

Mahama is showing incompetence even in opposition – #FixingTheCountry Movement

BizTech: COPEC breaks down impact of PRSL decision on consumers

Unemployment rate at its lowest in 30 years