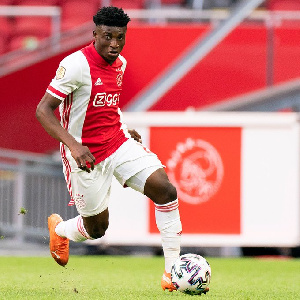 Mohammed Kudus in action for his club

Ghana star Mohammed Kudus made a wonderful return to action by scoring for Ajax who recorded an emphatic victory over Fortuna Sittard in Eredivisie.

Kudus netted the fourth goal for the Dutch champions in the 5-0 win to extend their unbeaten run to six games.

It was the attacking midfielder’s first game of the season. An ankle injury sustained in pre-season ruled Kudus out of first four games.

He returned to the squad last weekend but played no part as Ajax SC Cambuur 9-0.

On Tuesday evening, Kudus was introduced in the second half and scored in the 77th minute.

Kudus steered the ball home from close range after receiving a pass from captain Dusan Tadic.

The 20-year-old will hope to stay fit and win back his position in the lineup.