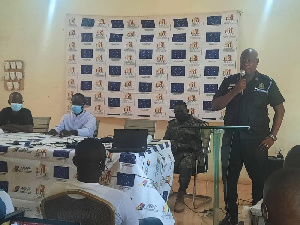 Communities in the Karaga District of the Northern Region have been encouraged to form watchdog committees to closely monitor suspicious elements and report them to the law enforcement agencies for appropriate action to be taken against them.

Superintendent Alhaji Abdul-Latif Nbonwura, Karaga District Police Commander, who gave the advice, said this would complement efforts at fighting crime as well as prevent violent extremism in the district.

Superintendent Alhaji Nbonwura gave the advice while making a presentation at a forum on violent extremism organised by the Karaga District Directorate of the National Commission for Civic Education (NCCE).

The forum, held at Karaga, formed part of the Preventing Electoral Violence and Providing Security to the Northern Border Regions of Ghana project funded by the European Union to as part of the assignment counter violent extremism in the country.

Representatives of youth groups in the Karaga District including Karaga Youth Parliament, Tiyumtaba Youth Association, women groups, political parties, Assembly Members, Heads of Department amongst other stakeholders in the district attended the forum.

It was aimed at equipping participants especially the youth with the relevant information on violent extremism and radicalism, so that they would guard against being recruited to perpetuate violence.

Superintendent Nbonwura spoke about the drivers of and measures to prevent violent extremism and called on community members to closely monitor activities of especially youth groups and report unusual activities such as secret meetings so they could be put under surveillance.

He further called on citizens, who were on information technology (IT) platforms, to be alert and report acts of extremist nature because most extremist groups used IT platforms to recruit their targets to perpetrate their acts.

He announced that the Police would be embarking on community outreach in the district to preach peace, unity, and law and order, and urged residents to cooperate with the Police by sharing information on timely manner to help arrest crimes in the area.

Lieutenant Israel Halm, Commander of the Ghana Armed Forces in the Karaga District, emphasised need for unity amongst the people in the area to promote peace.

Reverend Father David Ukpabi of the Saint Jude Parish at Karaga, who spoke on peacebuilding mechanisms, called on the citizenry to respect the views of one another as well as avoid discrimination to ensure continued peace in the area.

Mr Mahama Osman, Karaga District Director of NCCE, urged participants to share the knowledge gained with their community members to ensure that all would be alert to help prevent violent extremism in the area.

‘If next coach fails, heads should roll at GFA’ – Augustine Arhinful reacts to CK Akonnor’s dismissal