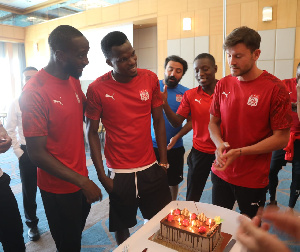 Cofie was presented with a cake on his 30th birthday in the midst of his clubmates and some of the technical handlers of Sivasspor.

The midfielder will this evening take part in Sivasspor’s away game against Yeni Malatyaspor in the Turkey Super Lig.

‘How could you ask that?!’ – Memphis Depay angered by Barcelona regret question